Guidance of the Kanze school society 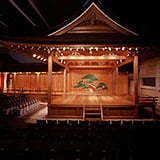 General Kanze school society
●1900 establishment
●1951 authorization
A school, Kanze school to inherit the tradition of approximately 600 years from Kanami, Zeami who is a person of completion of the ability. The Kanze school proud of the biggest scale to among Noh five kinds of deportation groups works on tradition and the development of the Japanese traditional entertainment energetically as a school on behalf of Noh world.

"General Kanze school society" is a group making the core of the Kanze school, and 26th head family Kiyokazu Kanze inheriting the genealogy is constituted in the first on the list by 66 Kanze school protagonist noh players. It is 1900 (Meiji 33) that our meeting was established. It became the corporate judicial person in 1951 (Showa 26) and, thank you, was able to reach the 100th anniversary again in 2000 (Heisei 12).

"The Kanze school noh theater" which was a headquarters was got close to by Shibuya-ku, Tokyo breeze through pine trees for 43 years, but I closed it in March, 2015 and moved to Ginza, Chuo-ku, Tokyo in April, 2017. There are many various performances got close to again in the wide layer as a multipurpose hall and performs a Noh performance more than approximately 130 times a year by approximately 26 times a year of Kanze school performances hosted by a meeting.

Guidance of the Kanze school performance hosted by a meeting